Nicole is working, living and learning in Galiwinku

For the last year our trainer for STEPS Skills for Education and Employment program, Nicole Webster, has been teaching language, literacy and numeracy in the remote Indigenous community of Galiwinku.

Located on Elcho Island just off the coast of the Northern Territory, Galiwinku is home to the Yolngu people. With clear, blue ocean beyond the coastline and dense bushland, the island community has about 2000 residents.

Nicole’s role in Galiwinku can change from one day to the next: from 4-wheel-driving in the bush to traditional basket weaving, from teaching cooking to soap making.

Basket weaving and organic soap making are two projects that the community has come on board with. Providing contextualised training, these projects promote learning skills such as planning, working within a team and problem solving.

Nicole said the women’s weaving group has been quite successful.

“I have a group of women that do some traditional weaving. We weave baskets and wall hangings and go into the bush and collect all the roots and plants that are needed.”

Nicole said it can take time to engage students and gain trust but one of the best parts of her job is when people build new skills.

Nicole said another great aspect of her job is the connections she has made.

“It takes a long time and so I feel like the best part of my job is the genuine relationships that I form.”

Nicole said as a consequence of these relationships she gains insight into culture but this is something else that takes time.

“Culture doesn’t just get given out and shown, you have to be around it and learn it slowly, and that’s something I treasure.”

When Nicole was first settling into life in Galiwinku she faced her own set of challenges.

“You have to have patience up here. I’m okay now but when I first started I think it was probably the most challenging aspect of my job because life has a different rhythm, and if you don’t learn to match that rhythm then you won’t get much done.”

“There are about two thousand people that live here, so you have to make sure you are abiding by cultural rules all the time.”

For those who are thinking about working with STEPS in Galiwinku, Nicole suggests that you consider the reality of living and working in remote communities as often people romanticise the job.

She said there are social problems in Galiwinku.

“I think, invariably, if you live here that is going to be a part of your reality. You’ve got to have patience and be prepared to work hard as well.”

Besides the frequent crocodile sightings, Nicole enjoys the quiet life, most of her down-time is spent walking on the beach, cooking for friends and reading.

“You don’t get the entertainment of the city, you have got to learn to entertain yourself and be happy in your own space.”

Nicole said the environment can be challenging.

“Sometimes it can be very physically demanding, you have to be quite independent and quite strong,” she said.

Despite the challenges, Nicole said she loves the wildlife and nature in Galiwinku.

“It’s beautiful living out here, geographically it’s stunningly beautiful. Every day I drive to work and drive past a really beautiful view of the ocean.”

A taste of the world in TasmaniaEducation & Training 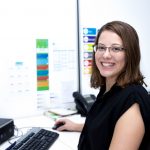 A moment with MichaelaStaff Stories
X