Craig Bardsley has worked with kids and adults with special needs since he was 17; that’s 20 years doing what he loves.

Up until the middle of last year, he worked as a Teacher’s Aide at Mitchelton State Special School in Brisbane before moving to the Sunshine Coast to work with students with special needs at North Arm State School.

Craig first decided this was what he wanted to do when he was just seven. He had a second cousin with Down syndrome and he remembers asking his mum: “What’s wrong with Oliver?” His mum explained that Oliver had Downs syndrome.

His Mum told him that he could do that as a job when he was older. Craig remembers deciding then and there that that’s what he would do.

Craig also works with crocodiles, pythons and a variety of lizards, dragons and goannas. As a demonstrator with Dreamtime Reptiles, he has spent eight years performing reptile shows all around Southeast Queensland. He works with some of the most venomous snakes in the world, showing people how snakes behave, how they respond to being confronted, and how to do first aid if they are unlucky enough to be bitten.

When asked what motivates him, Craig says: “I want to empower people to make wise and safe choices. Sometimes we need some help to make good decisions; I want to be there to help others make choices and also to teach them how to make decisions for themselves. Mistakes happen and I think it’s great to make a few. My best lessons in life have come from falling flat on my face! Sometimes I learn straight away and sometimes I fall flat on my face multiple times for the same reason. I think I learn more each time. Resilience builds success.”

Craig hopes to cultivate a learning environment where it’s okay to make mistakes in order to learn. “I want to show students how to be lifelong learners,” he says. He understands that part of independence is having a great support network around you.

“I want the students to build connections and have the supports and knowledge to have their best life. That will look different for each student, but that’s what makes this program great. Everyone can learn at their own rate and achieve their best, each individual setting and achieving their own goals.”

Craig loves teaching, witnessing the sense of pride a student gets when they learn something new or achieve a hard-won goal.

“It’s the look on a student’s face when something “clicks” or they achieve something they never thought possible. It could be making a meal or travelling on public transport independently for the first time,” he says.

Craig believes success is measured in steps and he gets a lot of satisfaction helping students take the steps needed to gain those successes. He knows that to continue to grow the students need to build on the experience of success, so when they are faced with a challenge they remember that they have been challenged before and they have won.

To find out more about STEPS Pathways College contact 5458 3000. 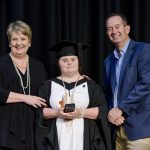 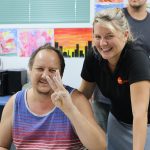