On August 29, STEPS Education and Training in Cairns successfully graduated the CHC33015 Certificate III in Individual Support (Ageing and Disability) class of March 2019. And while the recent graduates are from a range of diverse backgrounds, each with its own set of challenges, one young man – Fabien Rwigema – stands out as one of the “most determined people” trainer Moira Kenny has met.

Moira, from STEPS Education and Training, said Fabien Rwigema endured living conditions we “could not even fathom” before coming to Australia.

Born in Congo and the oldest of nine siblings, Fabien was forced to leave his home at a young age and live in a refugee camp in Rwanda for an incredible 22 years. “He always felt education was his key to a better life so he was determined to continue schooling despite the enormous obstacles,” Moira said.

These “enormous obstacles” included walking 20 hours to school while carrying enough food and water for his week of schooling, and then walking back to the camp at the end of every week. Somehow, Fabien persevered with this 40 hour round trip every week for several years until he eventually graduated from high school.

Arriving in Cairns earlier this year, Fabien said he felt “exuberant and surprised, but also frightened” to communicate with Australians. Since joining STEPS’ Skills for Education and Employment (SEE) program, Fabien’s English language skills have grown along with his confidence, both of which helped him stay on track to complete his studies and graduate.

“I feel good,” he said, speaking of his achievement. “It’s my first certificate and I feel proud. The big challenge for me was English language in general, and the English in the certificate course was also challenging because it’s industry language. But I can understand it now.”

Individual Support Trainer Kate Sweeting worked closely with Fabien and the other students and said it was wonderful to see their graduation so well attended. Representatives from job service agencies, National Disability Insurance Scheme agencies, the local Police, Centacare Migrant Services and Centrelink were present, but it was the friends and family of the student graduates who beamed the most with pride. Except, perhaps, for the students themselves who had good reason to be proud of their achievement.

Adversity, in forms most of us couldn’t begin to imagine, might easily have prevented any one of them from graduating. Limited education, transportation, financial burdens, personal afflictions, family issues and demands were just some of the weekly obstacles students had to surmount.

“Some of these students lived in refugee camps for many years prior to coming to Australia, enduring appalling conditions,” Moira said. “However, these students did not take their eye off the ball. They persevered, remained focussed, and won.”

At the graduation, Moira described the class as a “very proud and pleased” group of students. “They had achieved their Certificate III which is a milestone by any measure, but in particular, these students all had adverse challenges which made their achievement all the more impressive. We at STEPS are so proud of them.”

Fabien said his goals are now to get a job so he can save money and go to University to continue his studies in Nursing – a goal which once seemed insurmountable.

“Observing his own progression in our course has helped him to believe that a career in nursing is possible,” Moira said.

STEPS Education and Training is a provider of the Skills for Education and Employment (SEE) program which provides language, literacy and numeracy assessment and training to eligible students. 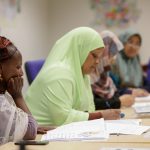